Although an old idea, introduced in the early days of quantum chemistry, reduced density matrix functional theory (RDMFT) has been explored and applied to real systems only the last two decades. In RDMFT, the one-body reduced density matrix (1-RDM) is the fundamental variable in analogy to density functional theory (DFT) where this role is played by the electronic density. The main task, in RDMFT, is to construct approximate expressions (functionals) of the total energy in terms of the 1-RDM and minimize them in order to obtain the total energy as well as the one-body reduced density matrix of the ground state. The main target of RDMFT is not to replace well-established theories of the electronic structure but to complement them and improve their results for the systems and properties that these theories do not describe properly. Such systems are, for example, those collectively termed as “highly correlated systems”.

Additionally, we attempt to construct approximations by employing forms with physical meaning and fitting parameters to reproduce known properties of small molecular systems. Two such functional, we developed, is the ML [3] and Power functionals [4]. We performed large-scale evaluation tests for the most important functionals for quantities like correlation and atomization energies for a large set of (~150) molecules and radicals (fig. 2)[5].  We have created a computer code implementing all functionals, which can provide a full comparative assessment of all approximations for finite systems based on a Gaussian-type-basis expansion of the molecular orbitals.

We applied 1-RDM functionals to periodic systems with the focus on the famous band gap problem which is one of the pathologies of most DFT approximations. A recipe for the calculation of the fundamental gap is used, which is based on Energy-derivative discontinuities [6]. We showed that there are RDMFT functionals that reproduce the fundamental gaps of semiconductors and insulators [7] including those with Mott insulator behavior (fig. 3).

We studied quality features of functionals like size consistency [8] and the behavior in the regime of fractional spins [9]. Finally, a recently defined single electron spectrum given by a recipe similar to Janak’s theorem in DFT was applied in the study of ionization energies and electron affinities of molecular and ionic systems [10].

The target of this research direction is to contribute in the development of theoretical tools based on RDMFT for the accurate description of systems, like highly correlating materials, for which the results of most density functional approximations are not satisfactory.

Fig. 2: Plot of the correlation energy calculated with various methods versus the exact for a set of 150 molecules and radicals. The dashed line corresponds to perfect agreement with the exact.

The Optimized Effective Potential (OEP) method is one of the ways that can improve accuracy in Density Functional Theory. Within this method, explicit orbital functionals are minimized in terms of the local potential. This is an equivalent procedure to minimization with respect to the electron density.

When the potential and the orbitals are expanded in finite size basis sets, the OEP method is well-known to lead to an ill-posed problem with a non-unique solution for the potential. We showed that the underlying mathematical problem is the discontinuous behavior of the solution of the OEP equation (Fredholm equation of the first kind) when the density-density response function (i.e. the kernel of the integral equation) is truncated with a finite orbital basis set and then inverted. We proposed a remedy for this problem that leads to a sound definition of OEP for finite basis sets (Fig. 1). 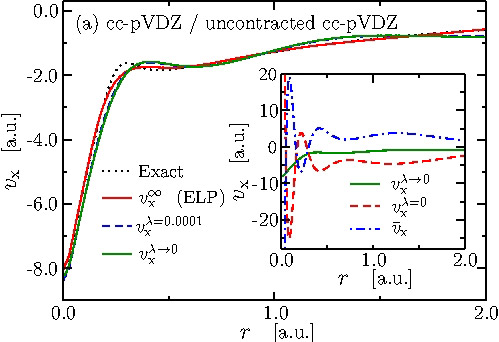 Self Interactions (SI) is a major problem in most Density Functional Approximations. We proposed a remedy which is based on the minimization of any DFA total energy in terms of the local potential in the OEP fashion, under two subsidiary conditions. The first of these conditions restricts the optimal potential to have the correct asymptotic behavior (N-1)/r. The second, restricts the corresponding “screening-density” defined as the negative Laplacian of the potential to be positive in all space. Under these conditions we demonstrate that a major manifestation of SI in LDA, namely the severe underestimation of Ionization energies and electron affinities is largely corrected (Fig. 2).

The OEP method can be used in reduced density matrix functional theory (RDMFT) as an approximate but very efficient way to minimize functionals with respect to the approximate natural orbitals. On the other hand RDMFT functionals can be viewed as correlated functionals in OEP theory beyond the exact exchange. Finally, the spectrum of the effective local potential offers a single electron spectrum missing from RDMFT. We implemented OEP theory for RDMFT (Fig. 3) and showed that in most cases the quality of the functional in reproducing electronic correlations is not affected by the restriction of local effective potential yielding approximate natural orbitals (Fig. 4). In addition we demonstrate the usefulness of the single electron spectrum of the local potential by comparing the HOMO energies with ionization energies.

Graphene, i.e. a single mono-layer of Graphite attracts an immense interest recently after its experimental identification due to its unique properties and its potential for novel applications.

We are studying, theoretically, using modern electronic structure methods, the structural properties of graphene-based nanostructures. Our focus is on elastic properties like Young modulus and Poisson ratio of these structures and the dependence of these properties in the geometrical features of the nanostructure.

Our aim is also to provide atomistic models with data on prototype structures in order to fit the parameter of the models and carry out simulations of the material in a much larger scale than electronic structure methods and for finite temperatures.

Fig. 2: Total energy per atom of Graphene and pentaheptite under uniaxial strain. 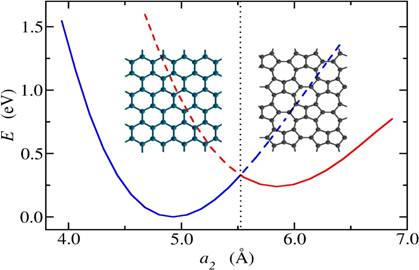 The construction of magnetic semiconductors opens the gate for applications where the electronic spin is also explored in electron transport phenomena (spintronics). ZnO is a wide band gap semiconductor and one of the most popular candidate materials for inducing magnetism through doping with transition metal impurities. Our target is the theoretical prediction of Ferromagnetism in doped ZnO. More specifically, we calculated the magnetic properties of various Co atom geometries in ZnO host at the DFT-GGA and DFT-GGA+U levels of approximations [1,2]. For this system, we confirmed, in agreement with experimental and other theoretical calculations that the system does not prefer a Ferromagnetic configuration.

One step further, we co-doped the above system with Cu. In this case, we demonstrated that for specific geometries, which might be suggestive for particular ways of crystal growth, a Ferromagnetic configuration is favored [2].

Fig. 1: Different configurations for the Co and Cu atom impurities in ZnO crystal.